"The younger generation is the arrow, the oldest is the bow."
John Steinbeck

From the Renaissance to the present day, the history of large family businesses tells the story of Italian entrepreneurship. Currently, 73% of Italy's 4.5 million companies are family companies representing more than 90% of the national production. As we all know, their skeleton is made up of SMEs and, to a large extent, family-run. We point out that 94% of companies have fewer than 9 employees, 4% have fewer than 49 and, therefore, 98% of Italian companies are made up of micro or small or medium-sized enterprises. Only 0.1% of the total has more than 250 employees.
Often these companies and their family members do not have sufficient managerial skills and may lack the organization needed for the difficult challenges of these times, or maybe have placed employees without specific character or competence into management roles. To make matters worse, we often see the children of entrepreneurs who have just left university in the company, who are catapulted into their father's organization with senior roles, without having any experience to manage them. This phenomenon is extremely dangerous for the Italian economic future; In fact, about 50% of Italian companies will face the family succession by 2020/25 as the founding owner grows older.
In Italy, therefore, much more than in the northern European countries, the family succession takes on strategic importance for the future industrial development of the nation. It should be noted that  50% of Italian companies have founders “over 60” that within 10 years will face a family succession. One would therefore expect greater attention to the problem on the part of the incumbent governments, with appropriate laws, contributions to the development of existing assets, with the investment in favor of experienced managers, to carry out the rite of passage. Instead, as we will see from the statistics, unfortunately, they show the frequent extinguishing and decimating companies within one or two generations after that of the founder: in the third generation, only 15-20% survives.
Society is also changing, increased life expectancy means that founding owners do not give up and hold the helm even in old age; we often see companies steered by founders over 70 and still very active..., but with a computer, digital, etc. preparation, often low level even non-existent. Moreover, there is little propensity and propulsion for innovation in general, which would be more typical of young age and more modern education (let's not forget that Facebook and the iPhone, were invented only in 2007).
It should be noted that the components that in the family succession are divided between those technical, and therefore rational, and those psychological/family, often irrational and not easily interpreted by the actors themselves, because they experiencing them personally. It serves – as we say in philosophy – a new Weltanschauung (worldview) by entrepreneurs: ready to put themselves on the line for one of the most important challenges of their corporate life, illuminate it with a specific approach, instead of managing it as a fact due and, simplistically, as one of the many daily commitments. We need a thorough analysis of the children and their abilities and attitudes, as well as the future of the company in perspective, devoid of the founder. 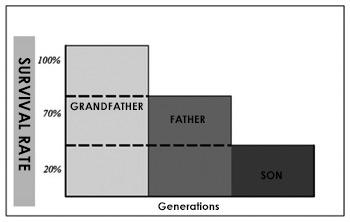 We use cookies to personalize content and ads, to provide social media features and to analyze our traffic. We suggest you select "Customize" to make your choices. Refusing cookies will not change the way our website works, however you will not be able to take full advantage of all its functions. For more information, see our privacy policy.